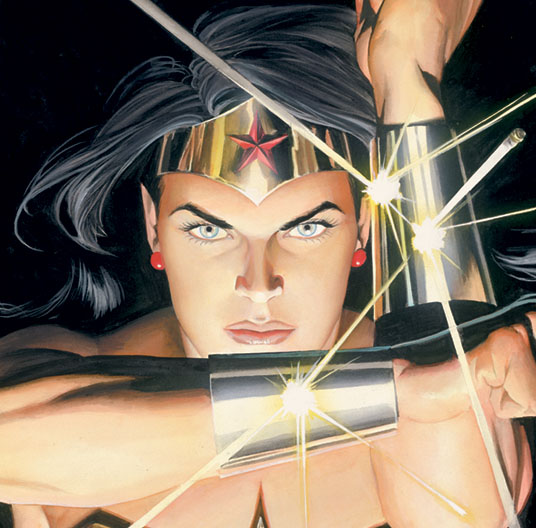 ABOUT WONDER WOMAN: A fictional character, a DC Comics super heroine created by William Moulton Marston as a "distinctly feminist role model whose mission was to bring the Amazon ideals of love, peace, and sexual equality to a world torn by the hatred of men." She first appeared in All Star Comics #8 (December 1941). The Wonder Woman title has been published by DC Comics almost continuously except for a brief hiatus in 1986. Arguably the most popular and iconic female superhero in comics, Wonder Wiman is also considered a feminist icon. Wonder Woman's origin story relates that she was sculpted from clay by her mother Queen Hippolyta and given life by Athena, along with superhuman powers as gifts by the Greek Gods. However, in recent years artists updated her profile: she has been depicted as the daughter of Zeus, and jointly raised by her mother Hippolyta and her aunts Antiope and Menalippe; artists George Perez gave her a muscular look and emphasized her Amazonian heritage; artist Jim Lee redesigned Diana's costume to include pants; she inherits Ares's divine abilities, becoming the personified "God of War"; and most recently, writer Greg Rucka, clarified her sexuality, giving her a backstory that includes positive relationships with women. Her Amazonian-training helped to develop a wide range of extraordinary skills in strategy, hunting and fighting. She possesses an arsenal of advanced technology, including the Lasso of Truth, a pair of indestructible bracelets, a tiara which serves as a projectile, and, in older stories, a range of devices based on Amazon technology. Although Diana is 5,000 years old, her first exposure to non-Amazon society as Wonder Woman will have only come within the last few 100 years. While the Amazons were originally created to protect "man's world," they ultimately abandoned it. Wonder Woman was created during World War II; the character was initially depicted fighting Axis military forces as well as an assortment of colorful supervillains, although over time her stories came to place greater emphasis on characters, deities, and monsters from Greek mythology. Many stories depicted Wonder Woman rescuing herself from bondage, which defeated the "damsels in distress" trope that were common in comics during the 1940s. In the decades since her debut, Wonder Woman has gained a formidable cast of enemies bent on eliminating the Amazon, including classic villains such as Ares, Hades, Cheetah, Circe, Doctor Psycho, and Giganta, along with more recent adversaries such as the First Born. Wonder Woman has also regularly appeared in comic books featuring the superhero teams Justice Society (from 1941) and Justice League (from 1960). Notable depictions of the character in other media include Gloria Steinem placing the character on the cover of "Ms." magazine in 1971; the 1975–1979 Wonder Woman TV series starring Lynda Carter; as well as animated series such as the Super Friends and Justice League. Since Carter's television series, studios struggled to introduce a new live-action Wonder Woman to audiences, although the character continued to feature in a variety of toys and merchandise, as well as animated adaptations of DC properties, including a direct-to-DVD animated feature. Attempts to return Wonder Woman to television have included a television pilot for NBC in 2011, closely followed by another stalled production for The CW. Gal Gadot portrayed Wonder Woman in the 2016 film Batman v Superman: Dawn of Justice, marking the character's feature film debut after over 70 years of history. Gadot will also star in the character's first solo live-action film Wonder Woman, set to be released on June 2, 2017. On October 21, 2016, the United Nations sparked controversy by naming Wonder Woman a UN Honorary Ambassador for the Empowerment of Women and Girls in a ceremony attended by Under-Secretary-General for Communications and Public Information Cristina Gallach and by actors Lynda Carter and Gal Gadot. Two months later she was dropped from her role as a UN Ambassador following a petition.
Read More about Wonder Woman