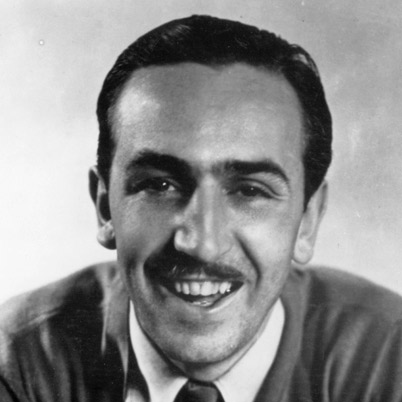 Walter Elias "Walt" Disney was an American film producer, director, screenwriter, voice actor, animator, entrepreneur, entertainer, international icon, and philanthropist, well known for his influence in the field of entertainment during the 20th century. Along with his brother, Roy Disney, Walt co-founded Walt Disney Productions, which later became one of the best-known motion picture productions in the world.

Disney is particularly noted as a film producer and a popular showman, as well as an innovator in animation and theme park design. He and his staff created some of the world's most well-known fictional characters including Mickey Mouse, for whom Disney himself provided the original voice. During his lifetime he received four honorary Academy Awards and won 22 Academy Awards from a total of 59 nominations, giving him more awards and nominations than any other individual in history. Disney also won seven Emmy Awards and gave his name to the Disneyland and Walt Disney World Resort theme parks in the U.S., as well as the various international resorts.

Walt Disney was a pioneer in character animation. He was one of the first people to move away from basic cartoons with just "impossible outlandish gags" and crudely drawn characters to an art form with heartwarming stories and characters the audience can connect to on an emotional level. The personality displayed in the characters of his films and the technological advancements remain influential today. He was considered by many of his colleagues to be a master storyteller and the animation department did not fully recover from his death until the late 1980s in a period known as the Disney Renaissance.