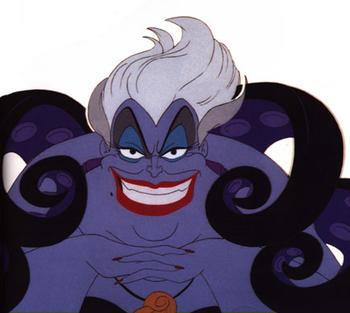 The main antagonist in The Little Mermaid, Ursula is an exiled cecaelian sea witch, who "helps" unfortunate, desperate merfolk to achieve her own goals. She appears as a mix of an obese, purple-skinned, white-haired female human and an octopus. She is very dark and sinister, a master at manipulating and convincing others to strike a deal. Deceptively compassionate, Ursula uses powerful dark magic to give merfolk what they want, while binding them to an indestructible contract. Ursula plays the classic devil role, offering binding, damning contracts to the desperate and unfortunate. When the merfolk fails to uphold their end of the contract, they are bound to Ursula forever, trapped as a small polyp in her lair. She used to live in King Triton's palace in the underwater city of Atlantica but was banished for her evil deeds. She has since sworn revenge on Triton and sees his daughter, Ariel, as a means to achieve it.   She appears in The Little Mermaid when the protagonist Ariel is lured to Ursula's lair. There, she offers the mermaid a deal: Ariel will become human for three days and may attempt to woo the human Prince Eric. If she can receive a "kiss of true love", she will permanently become human and live happily ever after. If Ariel fails, she will revert into a mermaid and be bound to Ursula forever. The price for the contract is Ariel's voice, which Ursula magically takes. Ariel comes close to recieving the kiss of true love, but constant interference by Ursula prevents it, including Ursula taking the form of a dark-haired woman named Vanessa and bewitching Prince Eric into marrying her. Ultimately, Ariel fails her task, is transformed back into a mermaid and becomes bound to Ursula forever.   It is at this point that Ursula strikes a deal with King Triton, Ariel's father: his freedom or his daughter's. King Triton agrees to take Ariel's place and becomes bound to Ursula. She takes his powerful magic trident and crown and becomes Queen of the Seven Seas. Prince Eric attacks Ursula with a harpoon and she retaliates by attempting to destroy him with the trident. Ariel interferes and Ursula accidentally destroys her two minions, Flotsam and Jetsam. This drives her furious and she uses her power to grow to massive size, rising out of the sea. As Ursula begins to blast the surrounding area with the trident to destroy Ariel, Prince Eric, in desperation, sails what is left of his ship into Ursula, impaling her on the prow of the ship. Losing control of the Trident, Ursula is then electrocuted by the storm that she had summoned. When Ursula is finally destroyed, all the merfolk that she had imprisoned were freed. Ursula is voiced by Pat Carroll in all her appearances.
Read More about Ursula