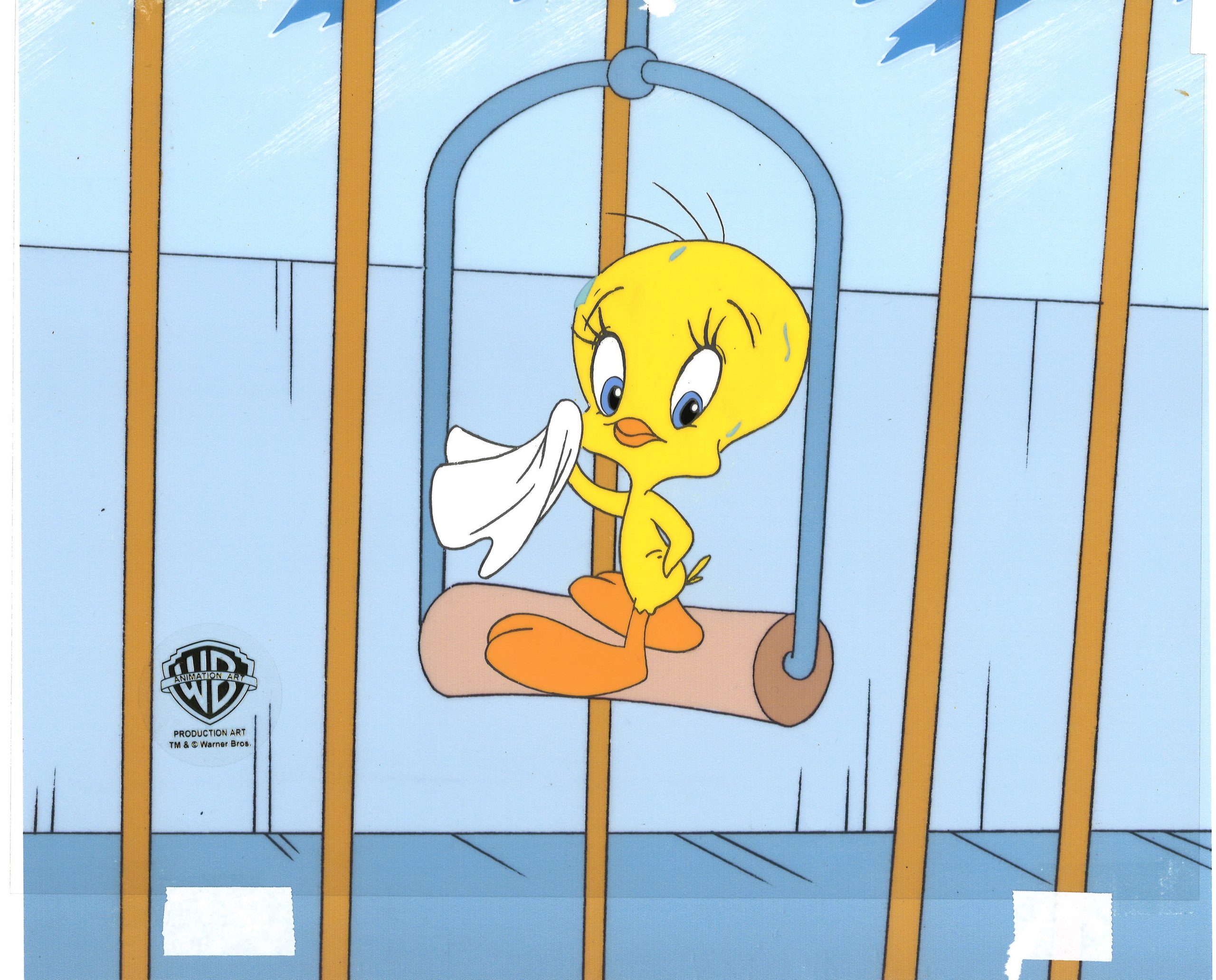 Tweety is a yellow canary in the Warner Bros. Looney Tunes and Merrie Melodies series of animated cartoons. The name "Tweety" is a play on words, as it originally meant "sweetie", along with "tweet" being an English onomatopoeia for the sounds of birds. His characteristics are based on Red Skelton's famous "Mean Widdle Kid." Tweety appeared in 46 cartoons during the golden age. Bob Clampett created the character that would become Tweety in the 1942 short A Tale of Two Kitties, pitting him against two hungry cats named Babbit and Catstello (based on the famous comedians Abbott and Costello). On the original model sheet, Tweety was named Orson which was based on the model sheets in the early 40s (which was also the name of a bird character from an earlier Clampett cartoon Wacky Blackout). Tweety was created not as a domestic canary, but as a generic (and wild) baby bird in an outdoors nest: naked (pink), jowly, and also far more aggressive and saucy, as opposed to the later, more well-known version of him as a less hot-tempered (but still somewhat ornery) yellow canary. In the documentary Bugs Bunny: Superstar, animator Clampett stated, in a sotto voce "aside" to the audience, that Tweety had been based "on my own naked baby picture". Clampett did two more shorts with the "naked genius", as a Jimmy Durante-ish cat once called him in A Gruesome Twosome. The second Tweety short, Birdy and the Beast, finally bestowed the baby bird with his new name, and gave him his blue eyes. Many of Mel Blanc's characters are known for speech impediments. One of Tweety's most noticeable is that /s/, /k/, and /g/ are changed to /t/, /d/, or (final s) /θ/; for example, "pussy cat" comes out as "putty tat", later rendered "puddy tat", and "sweetie pie" comes out as "tweetie pie", hence his name. He also has trouble with liquid consonants: as with Elmer Fudd, /l/ and /r/ come out as /w/. In Canary Row and Putty Tat Trouble, he begins the cartoon by singing a song about himself, "I'm a tweet wittow biwd in a giwded cage; Tweety'th my name but I don't know my age, I don't have to wuwy and dat is dat; I'm tafe in hewe fwom dat ol' putty tat." (Translation: "I'm a sweet little bird in a gilded cage...") Aside from this speech challenge, Tweety's voice is that of Bugs Bunny's, done a speed up only (if The Old Grey Hare, which depicts Bugs as an infant, is any indication of that); the only difference is that Bugs doesn't have trouble pronouncing /s/, /k/ and /g/ as mentioned above.
Read More about Tweety Bird