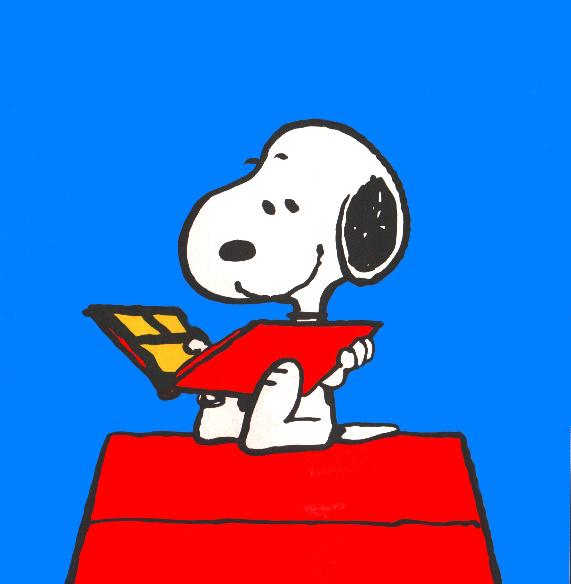 Snoopy is the popular dog character in the syndicated comic strip Peanuts by Charles M. Schultz. He is Charlie Brown's pet dog. Originally a minor character, Snoopy quickly rose in popularity and prominence and has become a beloved cartoon icon.   Snoopy is a white dog with black ears, a black nose and a black spot on his back. Originally just a conventional dog, Snoopy eventually evolved into into the strip's most dynamic character, with a series of quirks that quickly made him popular among fans. One of his most distinguishing characteristics is his tendency to sleep on top of his doghouse rather than inside it, due to claustrophobia. Two other popular gags involve Snoopy's overactive imagination, where he types correspondence or even novels on his personal typewriter ("It was a dark and stormy night...") or where he pretends that he is a World War I Flying Ace battling the Red Baron in the skies, with his doghouse acting as his fighter plane. Oddly enough, as the World War I Flying Ace, Snoopy's doghouse has suffered actual damage at the hands of the Red Baron at times, hinting that his imagination might be stronger than believed.   For the first two years of the Strip, Snoopy was a silent character. On May 27, 1952, Snoop verbalized his thoughts to the reader for the first time in a thought balloon. Originally communicating with just one word (such as "FOOD!"), Snoopy quickly became more articulate and even eloquent in his communication. In addition to communicating with the reader, Snoopy also somehow managed to communicate his thoughts to the neighborhood kids who would answer back, being able to interpret his thoughts. Unlike a regular dog, the other Peanuts characters treat Snoopy intelligently, speaking to him, giving and taking direction and even placing him on their baseball team. By the end, Snoopy had fully become a human-like character, in action and thought.   Snoopy remains, to this day, the most popular Peanuts character and one of the most popular and iconic cartoon characters of all time.
Read More about Snoopy