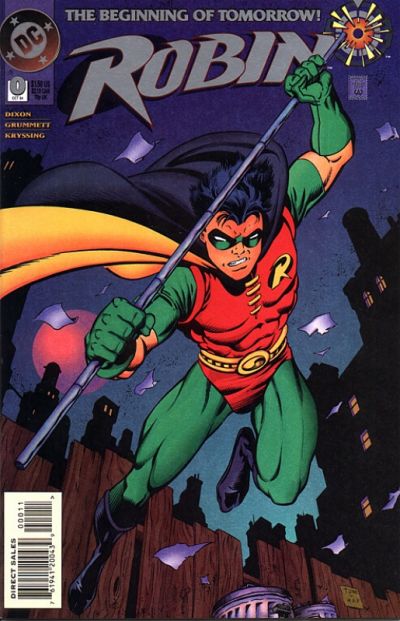 Robin is the name of several comic book heroes of DC Comics. Robin was created by Bob Kane, Bill Finger and Jerry Robinson as the junior counterpart to the superhero Batman. The team of Batman and Robin are commonly known as the Dynamic Duo or the Caped Crusaders. The first and most famous Robin, Dick Grayson, debuted in Detective Comics #38, to widespread acclaim. The first appearance of the Boy Wonder garnered overwhelmingly positive reception, making him a mainstay in the Batman comics since. Dick Grayson was Batman's sidekick from the 1940s to the early 1980s, when he set aside the Robin identity and became the independent hero, Nightwing. The second version of Robin, Jason Todd, debuted in Batman #357 in 1983. He would hold the title until his brutal murder by the Joker in A Death in the Family in 1989. Jason would find himself alive after a reality changing incident, eventually becoming the Red Hood. The third version, Tim Drake, rose in prominence in the premiere Robin limited series, which began in 1991 and ending in 2009, which helped with Robin's transition from a sidekick to a hero in his own right. For a brief period, Drake was forced into retirement and his on-off girlfriend, Stephanie Brown, also known as the hero Spoiler, took up the cowl. However, she was forcibly unmasked by Batman and supposedly killed by Black Mask in Batman: War Games. Her death was actually a ruse and she returned to being Spoiler, while Drake would reclaim his role as Robin. The fourth version, Damian Wayne, ascends to the position in Batman: Battle for the Cowl. In the wake of The New 52, Dick Grayson is Nightwing, Jason Todd takes the identity of the Red Hood, Tim Drake takes the name Red Robin and Damian Wayne is Robin.
Read More about Robin