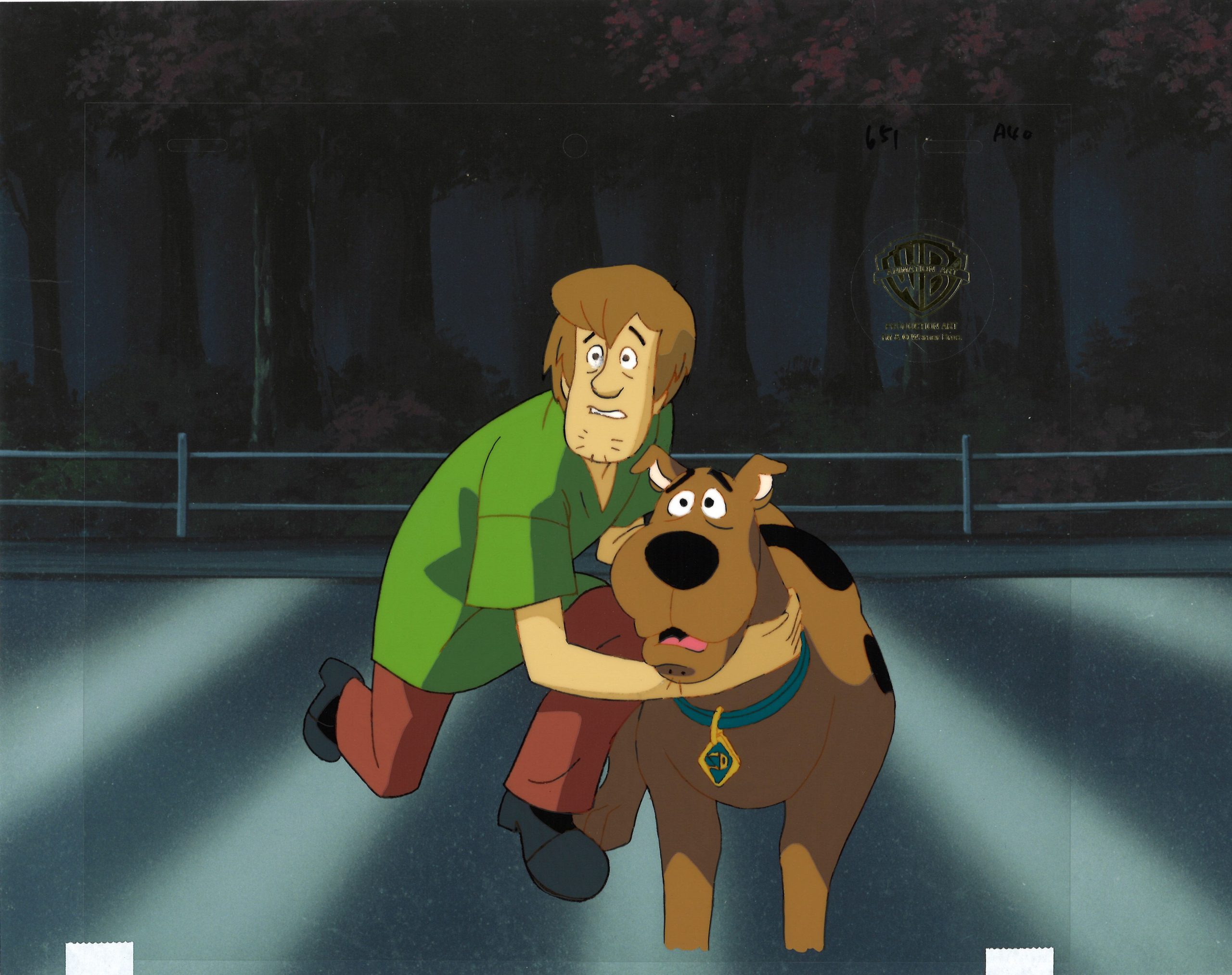 Norville "Shaggy" Rogers is a fictional character in the Scooby-Doo franchise. He is a cowardly slacker and the long-time best friend of his equally cowardly Great Dane, Scooby-Doo. Like Scooby-Doo, Shaggy is more interested in eating than solving mysteries. Shaggy has a characteristic speech pattern, marked by his frequent use of the filler word "like" and, when startled, his exclamations of "Zoinks!". His nickname derives from the shaggy style of his sandy-blond hair. He also sports a rough goatee. His signature attire consists of a green v-neck T-shirt and maroon bell-bottom pants, both of which fit loosely. In The 13 Ghosts of Scooby-Doo and early made-for-TV movies, he wore a red v-neck and blue jeans. Both Scooby and Shaggy are readily bribed with Scooby Snacks due to their mutual large appetites. Both display tendencies toward loafing and cowardice. Both justify their hunger by insisting that "Being in a constant state of terror makes us constantly hungry!" in Scooby-Doo on Zombie Island. Shaggy's favorite dish is "extra cheese pizza with pickles" (as revealed in the TV movie Scooby-Doo! Abracadabra-Doo). In "Bedlam in the Big Top", he says he used to be in track and in "What a Night for a Knight", that he was a gymnast – both of which hint at his uncanny skills in quickly evading villains and the reason he is invariably assigned the role of bait in Fred's traps. Due to being in track he has shown, in some instances, to be able to run even faster than Scooby, even when the latter is running on all fours. An early episode "A Clue for Scooby-Doo", from the inaugural series Scooby-Doo, Where Are You!, reveals that his taste for unlikely food combinations (chocolate-covered hot dogs and liverwurst "a la mode", for example) is a consequence of an infant Shaggy receiving a garbage disposal unit for his first toy. In Scooby-Doo! and the Monster of Mexico, Fred states that the reason Shaggy eats so much (and maintains his slender physique) is his "high metabolism". However, in Scooby-Doo: Behind the Scenes, Fred states that the real reason Shaggy is so skinny is because he goes on a vegan diet (a reference to Casey Kasem's vegetarian lifestyle). Shaggy has shown himself capable of impressive feats of athleticism through fear alone; however, these abilities are invariably of a comic nature, with Shaggy only seeming capable of such feats when panicked. In Scooby-Doo! Camp Scare, in frustration at being trapped, he shakes the iron bars of an old-fashioned jail cell so hard they collapse. Shaggy's typical immediate reaction to experiences or perceptions of supposed supernatural occurrences is terror-struck cowardice. This was explained in the Legend of the Phantosaur as a possible type of panic disorder; in this instance, he was temporarily cured with hypnotherapy.
Read More about Norville “Shaggy” Rogers