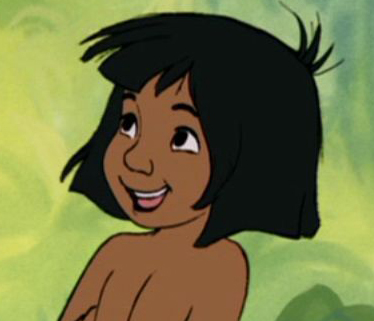 A fictional character and the protagonist of Rudyard Kipling's The Jungle Book stories. He is a feral child from India who originally appeared in Kipling's short story "In the Rukh" (collected in Many Inventions, 1893) and then went on to become the most prominent and memorable character in his fantasies The Jungle Book and The Second Jungle Book (1894-1895), which also featured stories about other characters.

The Mowgli soties, including In the Rukh, were first collected in chronological order in one volume as The Works of Rudyard Kipling Volume VII: The Jungle Book (1907) and subsequently in All the Mowgli Stories (1933).

In the Rukh describes how Gisborne, an English forest ranger in India at the time of the British Raj, discovers a young man named Mowgli, who has extraordinary skill at hunting and tracking, and asks him to join the forestry service. Later Gisborne learns the reason for Mowgli's almost superhuman talents: he was raised by a pack of wolves in the jungle.

Kipling then proceeded to write the stories of Mowgli's childhood in detail. Lost by his parents in the Indian jungle during a tiger attack, a human baby is adopted by the wolves Mother and Father Wolf, who call him Mowgli the Frog because of his lack of fur and his refusal to sit still. Shere Khan the tiger demands that they give him the baby but the wolves refuse. Mowgli grows up with the pack, hunting with his brother wolves. In the pack, Mowgli learned he was able to stare down any wolf, but his unique ability to remove painful thorns from the paws of his brothers was deeply appreciated as well.

Bagheera (the black panther) befriends Mowgli, because both he and Mogli have parallel childhood experiences, as Bagheera often mentions, he was "raised in the King's cages at Oodeypore" from a cub, and thus knows the ways of man. Baloo the bear, teacher of wolves, has the thankless task of educating Mowgli in The Law of the Jungle.

Shere Khan continues to regard Mowgli as fair game, but eventually Mowgli finds a weapon he can use against the tiger - fire. After driving off Shere Khan, Mowgli goes to a human village where he is adopted by Messua and her husband whose own son Nathoo was also taken by a tiger. We never find out for certain if Mowgli is the returned Nathoo, although a hint that he might be is provided in the Jungle Book story "Tiger! Tiger!" where we learn that the tiger who carried off Messua's son was lame, just as Shere Khan is lame. On the other hand, while Messua would like to believe that her son has returned, she herself realizes that this is unlikely.