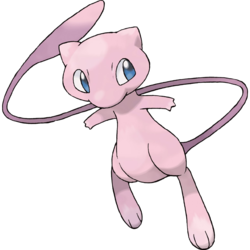 Mew is a small, cat-like Pokémon with small, pointed ears, blue eyes, a long, thin tail, and large feet with three toes. It is covered with a layer of fine, pink hair, only visible with the aid of a microscope. It has short arms with three fingers on each paw, and has small, orange, paw pads on the undersides of its feet. It is said that Mew's DNA possesses the genetic composition of all existing Pokémon species, thus allowing it to use all known Pokémon moves. Its possession of every Pokémon's DNA also allows it to devolve Pokémon. Mew is said to possess the genetic composition of all Pokémon. It is capable of making itself invisible at will, so it entirely avoids notice even if it approaches people. As demonstrated by its behavior in the first and eighth Pokémon movies, it shows signs of intelligence, curiosity, playfulness, and even selflessness. Mew is incredibly adaptable, able to travel freely in the air or underwater. As seen in Pokémon Snap, it can create a green/yellow/pink orb of energy around itself for protection. Reports found in Cinnabar Island's Pokémon Mansion note scientific expeditions that have sighted Mew in Guyana, South America, the place where it was first discovered. Since Mew can make itself invisible at will, very few people have knowingly seen it, leading some scientists to declare it extinct and most to assume it to be a mirage. It will only show itself to a person who is pure of heart.
Read More about Mew Original and Limited Art