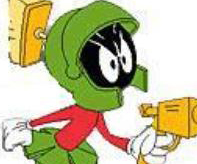 PAnimation director Chuck Jones noted that Bugs Bunny soon began to outwit Yosemite Sam (the creation of the senior director, Friz Freleng), so he decided to create the opposite type of character; one who was quiet and soft-spoken, but whose actions were incredibly destructive and legitimately dangerous. Marvin the Martian made his debut in 1948's Haredevil Hare.

Marvin's design was based on a conception of the Roman god Mars. "That was the uniform that Mars wore — that helmet and skirt. We thought putting it on this ant-like creature might be funny. But since he had no mouth, we had to convey that he was speaking totally through his movements. It demanded a kind of expressive body mechanics."

Marvin was never named in the original shorts (though he was called the Commander of Flying Saucer X-2 in The Hasty Hare in 1952), but decades later when the character attracted merchandising interest, the current name was selected.