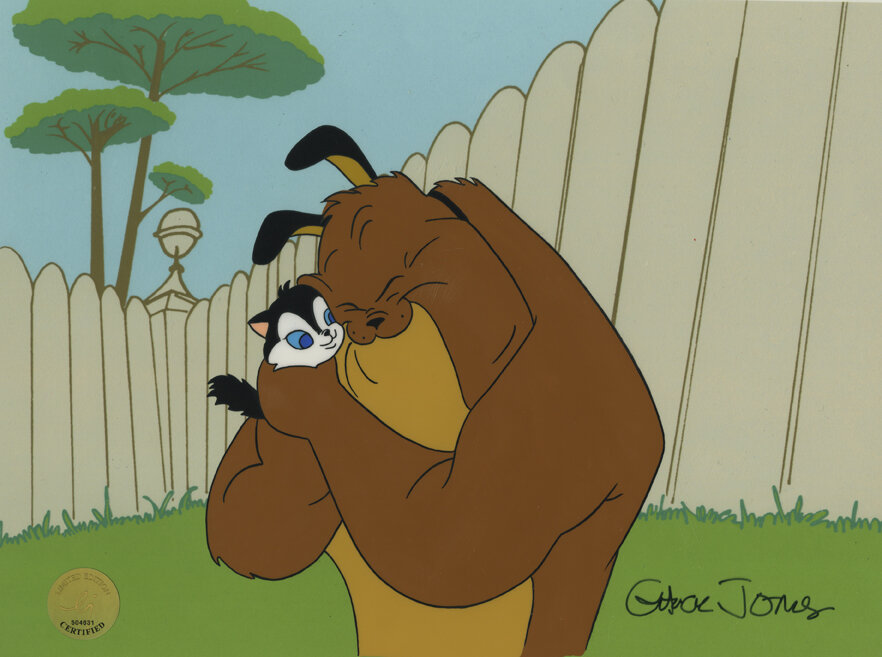 Marc Antony is a burly bulldog who is usually brown with a tan belly and black ears, although his coloration varies in some shorts. Pussyfoot is an extremely cute kitten to whom Marc Antony is utterly devoted. Charles Jones has discussed the efforts to maximize the kitten's sheer adorableness. All head and eyes, she is black with a white face and belly and a white tip on her fluffy tail. Animator Chuck Jones first introduced the odd duo in his film "Feed the Kitty", first released on Groundhog Day, 1952. Prior to this, a bulldog similar to Marc had appeared in previous shorts with Claude Cat and Hubie and Bertie, but he was never named. In the short, Marc Antony adopts the interminably cute kitten, only to receive a stern warning from his owner not to ". . . bring one more thing into this house! Not ONE, SINGLE, SOLITARY thing!" Marc Antony is thus forced to go to extreme lengths to keep his new pet under wraps. Meanwhile, the kitten's curiosity gets her into a series of life-threatening situations, which Marc Antony must, of course, rescue her from. Jones would largely repeat the scenario in 1953 with "Kiss Me Cat", only this time, Marc Anthony tries to convince his owners that the kitten (now named Pussyfoot) is a champion mouser so that they will let him keep her. In "Feline Frame-Up" (1954), Jones pitted the dog and kitten against another of his lesser-known players, Claude Cat, with Claude as the villain bullying and causing trouble to the duo. Later in 1954, Marc Anthony (or a bulldog looking just like him) made a brief appearance at the end of the Claude Cat/Frisky Puppy short, "No Barking". Jones directed a quite different entry in 1957 with "Go Fly a Kit," the story of an eagle who teaches a different-but similar-looking-male kitten how to fly. In this cartoon, Marc Anthony serves as a villain, chasing an orange female-cat, that the Pussyfoot-like kitten saves. This is the only cartoon which saw the two on opposite sides. In 1958, Jones paired the cat and canine for one final film, "Cat Feud", in which Marc Anthony (with grey coloring, and a more fierce personality) must defend Pussyfoot (and her cat food) from a thieving interloper from the alleys that resembles Claude. This is the second time Claude, Marc and Pussyfoot are paired together, and much like Feline Frame-Up, the Claude-like alley cat is the villain. A grey version of Marc Anthony also made a cameo appearance during the final scene of Who Framed Roger Rabbit (1988). They also appear in a cameo during the basketball game in Space Jam (1996). The duo would later make a cameo appearance in the ending scene of Looney Tunes Back in Action (2003).
Read More about Marc Antony and Pussyfoot