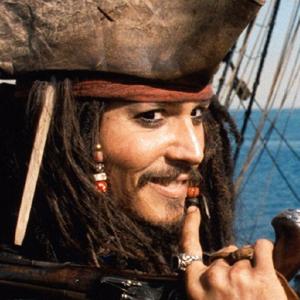 Jack Sparrow, portrayed by Johnny Depp, is a main protagonist in the Pirates of the Caribbean film series. He was an infamous Pirate Captain in the Caribbean, most notably in command of the ship the Black Pearl.

The son of Captain Edward Teague, Jack was born onboard a ship caught in the middle of a typhoon. It is unknown whether "Sparrow" is his original surname or a name that Jack gave himself. At some point in his career Jack obtained the title of Pirate Lord, his domain being the Caribbean Sea.

Seemingly a silly and irreverent fop prone to clumsy mistakes, Jack Sparrow is, in fact, a highly cunning, shrewd and calculating pirate. Although a very talented swordfighter, Jack prefers to solve his disputes verbally, reasoning "Why fight when you can negotiate? All one needs is the proper leverage." A morally ambiguous character, Jack Sparrow is a pirate through and through although he possesses a certain (very specific) degree of character. He possesses the legendary ship, the Black Pearl, a ship that was raised from the ocean by Davy Jones and given to Sparrow. The Black Pearl is the fastest and most dangerous pirate ship in the seven seas, enchanted by the power of Davy Jones.