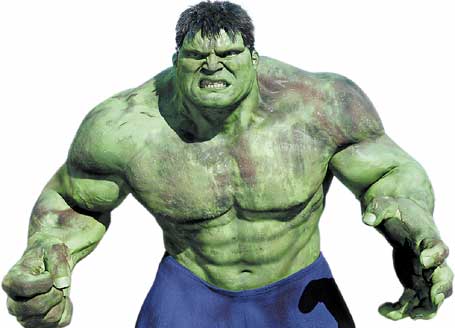 The Hulk is the uncontrollable, unstoppable, destructive force of the Marvel universe. Powered by pure rage, the Hulk possesses superhuman strength, speed, and durability. Worse is the fact that he becomes even more powerful the angrier he becomes. Pushed hard enough, the Hulk can fight, destroy and survive virtually anything. An important element to the Hulk's character is his uncontrollable nature: sometimes he is a hero, other times an unstoppable monster. It depends on the situation. The Hulk was originally Bruce Banner, an incredibly gifted scientist and nuclear physicist. Bruce was born to Dr. Brian and Rebecca Banner. Brian was an incredibly abusive alcoholic, driven to fits of jealousy and rage by the attention Rebecca paid to Bruce. Young Bruce regularly suffered at the hands of his father and even witnessed Brian murdering Rebecca in a moment of blind fury. Brian was subsequently arrested and sent to a mental institution. Bruce was sent to live with an aunt and internalized his pain and rage, an issue that would haunt him forever. After receiving his doctorate in nuclear physics, Bruce worked on an government military project to produce the G-Bomb (Gamma-Bomb), an explosive more powerful and devastating than an nuclear weapon before it. Exposure to the radiation mutated Bruce and led to his eventual transformation into the Hulk, a living gamma-powered monster. The differences between Bruce Banner and the Hulk create an interesting dichotomy; Banner is universally regarded as one of the most intelligent humans in the Marvel universe, whereas the Hulk is acknowledged as one of the most physically powerful. Because his strength is tied to his rage, the Hulk's power can rise exponentially and with virtually no limit, making him potentially the most powerful being in the Marvel universe. The Hulk does possess a few weaknesses. For instance, because he is born from gamma-radiation, somehow draining or removing the energy will severely weaken him or even transform the Hulk back into Banner. However, he has since developed a level of immunity to this strategy. The Hulk being able to combat and overcome his weaknesses through sheer rage and power is a common trend. The only reliable way to stop the Hulk has proven to be to calm the Hulk down somehow, either through adrenaline suppression or simply calming his rage (which is no easy task). The Hulk occasionally works alongside other Marvel heroes such as the Fantastic Four and the Avengers and can count them as his allies. He also counts his cousin, Jennifer Walters aka She-Hulk. However, the Hulk's rage and uncontrollable nature also regularly puts him at odds with these heroes because of his potential for destruction and their desire to stop him. The Hulk possesses many antagonists that range throughout the Marvel universe; the most infamous enemy of the Hulk is the Leader, a gamma-radiation mutated super genius. Another famous villain is the Red Hulk, a Hulkified General Ross, the man who was in charge of the G-Bomb project that transformed Banner into the Hulk.
Read More about Hulk