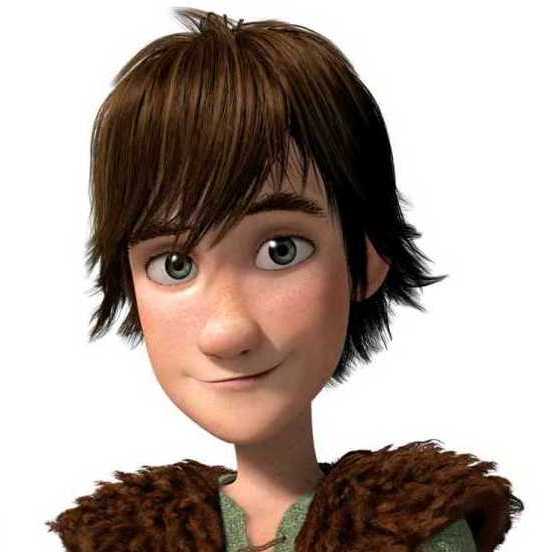 Hiccup Horrendous Haddock III is the main character of the How to Train Your Dragon films and books. He is a member of the Hairy Hooligan tribe and the son of the chief, Stoick the Vast, making him the heir to the tribe's leadership. His dragon, Toothless, is a Common or Garden Dragon in the books, but, in the film, is a Night Fury, one of the rarest, most intelligent dragons.   As a viking and heir to the tribe's leadership, Hiccup is expected to be strong, tough and heroic like his father. However, he is awkward for a viking, being small, clumsy and a poor fighter, marking him as an embarrassment for his father and his tribe. Because of his physical shortcomings, many of the tribe see him as useless or not worthwhile, building a thirst in him to be accepted by the tribe. He desperately wishes to gain acceptance and recognition by the other vikings, often throwing himself into situations before thinking which causes problems for himself and the rest of the tribe. In one instance, he accidentally destroyed a massive guard tower, single-handedly, during a dragon attack.   Hiccup's greatest strength is his mind. He is extremely intelligent, resourceful, and compassionate. After becoming apprenticed to the tribe's blacksmith, Gobber, Hiccup quickly gained the reputation as a tinkerer/inventor. He produced, by himself, a variety of advanced weapons for taking down dragons as well as his personal saddle and harness and a new tail fin for his dragon, Toothless. Although the weapons have a tendency to backfire and many of his inventions require constant tinkering, Hiccup still proves to be an extremely talented and imaginative inventor. He possesses keen powers of observation, eventually befriending a dragon after studying its behavior. He comes to learn several things about dragons including their aversion to eels and love a particular herb after observing and interacting with his dragon, Toothless. He is also exceptionally curious, wanting to learn everything about dragons after encountering Toothless. He has proven himself to be an extremely able dragon tamer, able to calm and control most dragons.   In the film and the books, Hiccup eventually proves his worth to the tribe, becoming a hero after saving the tribe from a Seadragonous Giganticus Maximus, a titanic dragon that threatened to eat the entire tribe. Afterwards, he is seen as an asset and hero to the Hairy Hooligans with his skills in befriending dragons, his intelligence and leadership skills.
Read More about Hiccup