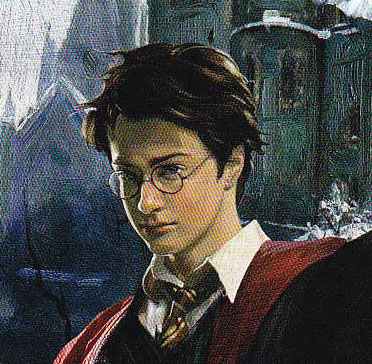 Harry James Potter is the title character and the protagonist of J. K. Rowling's Harry Potter series. The majority of the books' plot covers seven years in the life of the orphan Potter, who, on his eleventh birthday, learns he is a wizard. Thus, he attends Hogwarts School of Witchcraft and Wizardry to practice magic under the guidance of the kindly headmaster Albus Dumbledore and other school professors. Harry also discovers that he is already famous throughout the novel's magical community, and that his fate is tied with that of Lord Voldemort, the internationally feared Dark Wizard and murderer of his mother and father.

Harry was born to James and Lily Potter. His parents were unfortunately killed by Lord Voldemort and Harry is sent to live with his aunt and her family, the Dursleys. It is there that he endures years of mistreatment at the hands of his family for being the son of Lily and James, who they saw as "freaks". He is saved from this terrible life with the news that he is a wizard. Attending Hogwarts, Harry, for the first time in his life, makes friends and is happy in a world that doesn't hate him.

Harry is a generally intellegent, considerate and courageous young man, although occasionally his temper gets the better of him. He is a talented wizard and a naturally gifted Quidditch player. Despite the years of mistreatment at the hand of the Dursleys, Harry has never acted out of cruelty although he has occasionally acted out of hatred. He is very loyal, especially to his friends, and possesses a great strength of character and heroic nature. Naturally selfless, Harry would immediately go to great lengths and at great risk in order to help others.