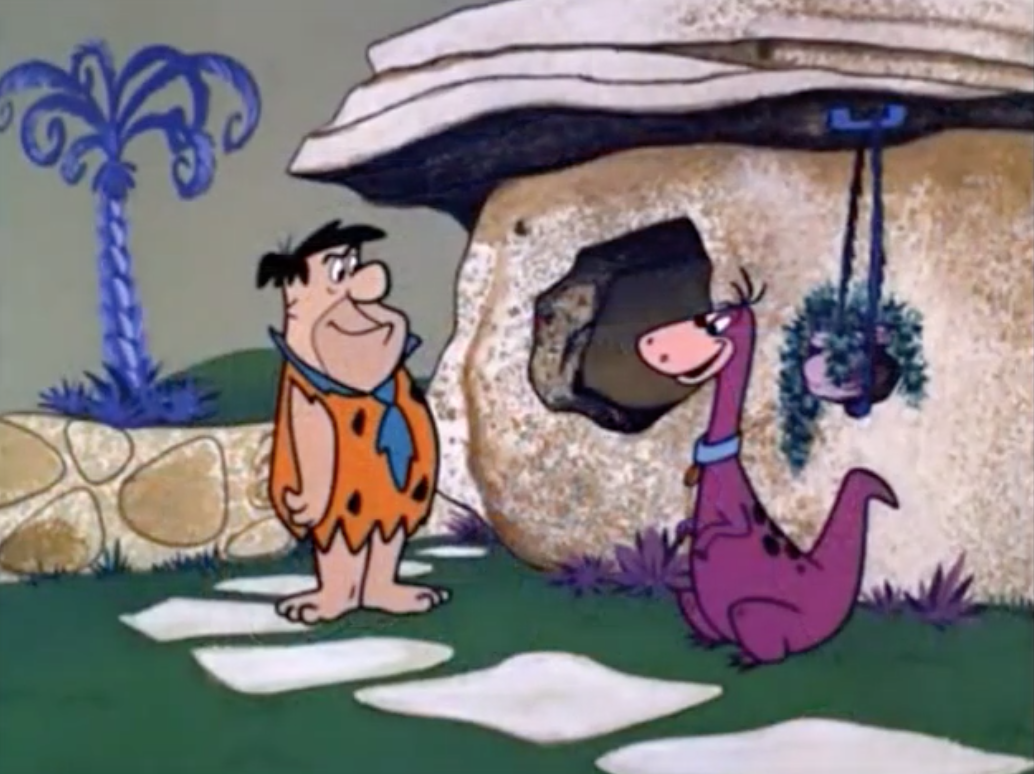 Dino is a pet dinosaur of the Flintstones series' main characters, Fred and Wilma Flintstone.featured in the Hanna-Barbera animated television series The Flintstones, and its spin-offs and feature films. Dino debuted in the opening credits of the pilot episode of The Flintstones, but is not mentioned by name until the first season's fourth episode, "No Help Wanted." In the series, Dino serves the role of a pet dog, and exhibits the characteristics of a typical domesticated canine. Dino is a prosauropod-like dinosaur, a Snorkasaurus. Dino is a relatively small dinosaur, only slightly larger than the humans of his time, smaller than mammoths that appear in the series, and much smaller than the numerous sauropods that appear as work animals in the series (a full-sized sauropod appears as a crane in the opening sequence, and oversized "bronto ribs" the size of an automobile are seen in the closing credits). A recurring gag in the series is Fred coming home from work, and Dino gets excited and knocks him down and licks his face. But no matter how hard he tries to the contrary, Fred usually gives in to Dino's ticklish and wet doglike kisses. Dino frequently exhibits human emotions, nearly "talking," and can also be moved to anger, at which point he snarls and snaps, especially when Fred tries to lie either to or in front of him, which he can always tell. He also loves to play with Pebbles and Bamm-Bamm, the Flintstones' and Rubbles' respective offspring; these characters are introduced in the middle part of the series. In the episode "Hop Happy" Dino meets Hoppy, the Rubbles' new pet hopperoo. At first, Dino and Fred get scared, thinking he's a giant mouse, but they eventually become best friends after Hoppy helps Dino rescue their owners in an accident. Although he is usually immune, Dino does take a couple of brief stabs at romance. The first comes in the episode, "Dino Goes Hollyrock", which originally aired on September 14, 1962. In it, he falls in love with female TV star sauropod "Sassie" (an obvious takeoff on "Lassie") and then becomes her co-star on her TV show. However, after she removes her false eyelashes and wig, he is shocked that she turned out to be an ugly, talented sauropod that could be beautified. The second comes in the episode, "Dino and Juliet", which originally aired on November 26, 1964. In it, Dino falls in love with the new neighbor's female sauropod (Juliet). Their romance, which results in the birth of 15 puppies, helps end the feud between Fred and the new neighbor, Mr. Loudrock. Although the pet dinosaur had already appeared earlier in the series' first season (such as the episode "No Help Wanted" and "Arthur Quarry's Dance Class" - these episodes were made after the "Snorkasaurus Hunter" but aired before), he is portrayed quite differently in the first season's 18th episode "The Snorkasaurus Hunter." In this episode, Fred and his friend Barney Rubble are on a camping trip, trying to hunt a snorkasaurus. Unlike his other appearances, the snorkasaurus in this episode speaks and behaves toward Fred and Barney in a manner similar to comedian Phil Silvers. At the end of the episode, the Flintstones take in the dinosaur; the snorkasaurus (called "Dino" at one point by Wilma) is seen acting like a butler for the Flintstones: answering the telephone, dusting, and ironing. Dino in this episode also has purple skin instead of his varying pink-to-red color, which seems to vary from episode-to-episode during this early period, but is permanently purple after this episode. After this episode, Dino is permanently portrayed as behaving in a doglike fashion.
Read More about Dino the Flintstones Pet Original and Limited Edition art