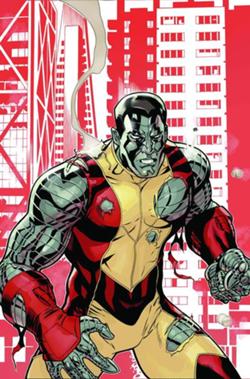 Born to a simple farm life, Piotr Rasputin was the younger brother of the famous cosmonaut Mikhail Rasputin. Gifted as an artist, Piotr was content with his simple life, until he was approached with a chance to change the world, by Professor Charles Xavier. After joining Professor X's X-Men, Piotr has been using his mutant power, to turn to organic steel and gain superhuman strength, to fight for the peaceful coexistence of mutants and humans most of his life.   After his younger sister, Illyana Rasputin, was kidnapped, Piotr had her live with him, until she was kidnapped again, by Belasco, and kept aged over ten years and returned as a sorceress. After his parents were murdered and his sister died of the Legacy Virus, Piotr began to lose his resolve and, at his sister's funeral, joined mutant terrorist, Magneto's Acolytes on Avalon.   After Avalon's destruction, Colossus joined Excalibur, but later returned to the X-Men. When Beast found a cure for the Legacy Virus, Colossus sacrificed himself to give a serum. After being revived, by Ord of the Breakworld, Colossus rejoined the X-Men and, after the releasing of the Asgardian God of Fear, Juggernaut became Kuurth Breaker of Stone and Cyttorak granted his power to Colossus.
Read More about Colossus