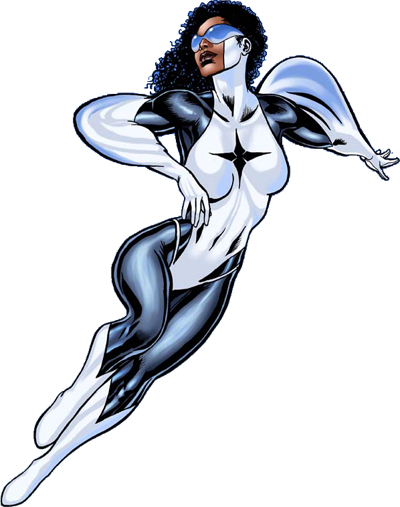 The second Captain Marvel is Monica Rambeau, a police lieutenant from New Orleans who possesses the power to transform herself into any form of energy. Her powers were briefly altered so that she cannot transform to energy, but instead can generate a personal force field. Sometime later, the Stranger returned her energy transformation abilities. She is a member of the Avengers, at one point serves as their leader. She uses the name Photon for quite some time, until Genis-Vell adopts the same name. Genis-Vell and Monica discuss this and Monica decides on the name Pulsar. Due to bombardment by extra-dimensional energies, Rambeau can transform herself into any form of energy within the electromagnetic spectrum. Among the many energy forms she has assumed and is able to control are cosmic rays, gamma rays, X-rays, ultraviolet radiation, visible light, electricity, infrared radiation, microwaves, radio waves, andneutrinos. By assuming an energy-form, she gains all of that energy's properties. She is invisible and intangible in many of her energy forms (the most frequent exception being visible light), and is capable of flight in all her energy forms (reaching velocities up to and including light speed). She also has the ability to project these energies from her body while she is in human form (only one wavelength of energy at a time), usually in the form of energy blasts from her hands. She mentally controls both the type and quantity of energy she wishes to transmit. The maximum amount of energy she can transmit at a given time is unknown. Rambeau can also divert small amounts of various energies for employment as force beams, which have the equivalent to 300 tons of TNT of explosive force. A variation of this ability enables her to project light-based holographic illusions of herself. Rambeau has also shown the ability to split her energy form into several miniature energy forms that are under her mental command, each miniature Rambeau is able to react and fly at light-speed. When she encounters a new or unfamiliar energy, Rambeau can often duplicate it given enough time for analysis. Rambeau tends to be physically insubstantial in her energy forms, though with concentration and effort she can sometimes perform tasks such as briefly grasping an object, either by partially solidifying or by applying some sort of force to the object in question. When Rambeau temporarily lost her original powers after a massive energy expenditure, she developed the ability to shunt any mechanical energy directed towards her through a dimensional interface surrounding her body, granting her increased strength, resistance to impact, and the ability to fly. After Rambeau asked Reed Richards to examine these new abilities, he theorized that she accessed the same dimension from which she derived her energy powers to create the interface. Rambeau has strong leadership skills and law enforcement experience due to both of her time as a police officer and former leader of the Avengers. She is an excellent markswoman, unarmed combatant, detective, and swimmer with extensive nautical expertise. She has received Harbor Patrol training, and Avengers training in unarmed combat by Captain America.
Read More about Captain Marvel (Monica Rambeau)