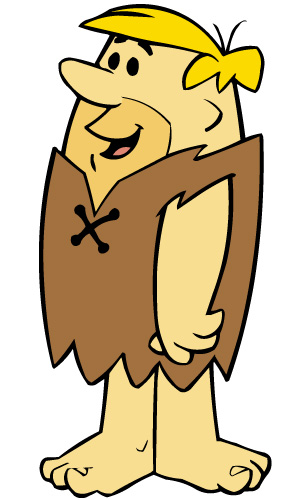 Barney Rubble is a character from the animated sitcom The Flintstones. Barney is the husband of Betty Rubble and the adoptive father of Bamm-Bamm. His best friends are his next door neighbors, Fred and Wilma Flintstone. Barney lives in the fictional Stone Age town of Bedrock, a world where dinosaurs and other prehistoric animals coexist with modernized cave-people who enjoy primitive versions of modern conveniences and technology such as telephones, automobiles and washing machines. Whereas Fred's personality was akin to Ralph Kramden from the sitcom The Honeymooners, Barney's character was based on that of Ed Norton from the same show. Unlike Fred, who is always coming up with get-rich-quick schemes and ridiculous plans, Barney is always content with his lot in life, only participating in Fred's schemes due to their friendship. Barney's most common catchphrase would usually come after Fred had hatched one of his plans. Rubble would usually show his agreement by laughing and saying "er huh huh... OK, Fred!" or "huh huh huh... whatever you say, Fred!" Although Fred is his best friend and Barney usually supports Fred wholeheartedly, even Barney can become irritated and exasperated by Fred's antics. Like Fred, Barney enjoys bowling, playing poker, pool and golf. He is also a talented musician, being able to skillfully play the piano and drums. Like Fred, Barney met his wife Betty as a young adult. Barney and Betty were both working at the same resort as a bellhop and a cigarette girl/waitress, respectively. They met, fell in love and married soon after. Barney and Betty come off as a good couple, with the only real strains to their marriage coming from Barney's participating in Fred's antics. Unlike Fred, Barney has never had any interest in any other woman in his life, remaining faithful to Betty. In the fourth season of The Flintstones, Barney and Betty found an abandoned infant on their doorstep by the name of Bamm-Bamm. Barney and Betty adopt the child and raise him as their own. Barney's job has always been a question that the show never answered. However, the majority of subsequent spinoffs suggest at some point after the original series, Barney went to work at the Slate Rock and Gravel Company alongside Fred.
Read More about Barney Rubble