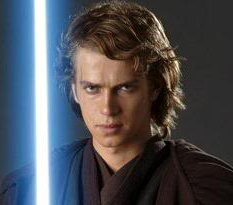 Anakin Skywalker, later known as the dreaded Sith Lord Darth Vader, was a young slave living on Tatooine with his mother. At the age of 9, he was discovered by a passing Jedi master Qui-Gon Jinn who saw the unparalleled potential Anakin possessed in the force. Taken to the Jedi Temple on Coruscant, Anakin was tested before the Jedi Council. It was there that he was told he was believed to be the "Chosen One", a mythical Jedi who would one day bring balance to the Force. He was eventually apprenticed to the Jedi Knight Obi-Wan Kenobi, apprentice to Qui-Gon.

Anakin trained with the Jedi, steadily becoming stronger in the Force. However, a variety of trials and tribulations would test his faith and strength. He became strongly attracted to Padme Amidala, the Queen of the planet Naboo and a respected diplomat. Such an attachment was highly forbidden by the Jedi, creating a conflict within Anakin. Later, he would return to Tatooine and discover his mother dying in a sand raider attack. This loss would cause Anakin to spiral out of control and he tasted the Dark Side of the Force.

A talented warrior and intelligent tactician, Anakin was made into a general, alongside now Jedi Master Obi-Wan, during the Clone Wars, fighting for the Republic against the Separatists. Near the end of the War, Anakin was seduced to the Dark Side by the Chancellor of the Republic, Palpatine, who was secretly the Sith Lord Darth Sidious. Under Sidious' guidance, Anakin cut ties with the Jedi order and was renamed Darth Vader. As the War drew to a close, much of the Jedi order was wiped out by the machinations of Sidious and the ruthless lightsaber of Anakin. In a climactic duel with his former master Obi-Wan Kenobi, Anakin lost his limbs and was left to die on a lava planet. As he lay there burning, Anakin was found by Darth Sidious, who quickly took him to be recuperated. In an agonizing procedure, Anakin's burnt remains were transformed in a mechanical monstrosity in order to keep him alive. As Obi-Wan Kenobi famously said, "He is more machine than man now". After the procedure, Anakin learned that Padme, the love of his life, had died supposedly by his hand. Consumed by anger and despair, Anakin Skywalker completely gave in to the Dark Side and fully became Darth Vader.