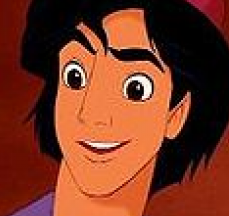 Aladdin (meaning, "glory of religion") is a Middle Eastern folk tale. It is one of the tales in The Book of One Thousand and One Nights (Arabian Nights), and one of the most famous, although it was actually added to the collection by Antoine Galland (see sources and setting).

A poor but intrepid ne'er-do-well, Aladdin is enlisted by a mysterious and malevolent sorcerer to acquire a magical oil lamp from the mystical (and dangerous) Cave of Wonders. In the original story, Aladdin gains two jinnis (genies). A lesser one from a ring that the sorcerer gave him for protection and a more powerful genie from the magic lamp. When the sorcerer double-crosses Aladdin and leaves him to die in the Cave of Wonders, Aladdin accidentally unleashes the genie in the ring when he rubs his hands in frustration. With it, he returns home and there, his mother releases the genie in the lamp. With the aid of both genies, Aladdin becomes rich, powerful and marries the daughter of the Emperor. However, the sorcerer returns to steal the lamp, the genie and Aladdin's princess. With the aid of his lesser genie from the ring, Aladdin manages to take back his bride and genie and defeat the evil sorcerer.

In the Disney film, Aladdin is a rough but kind street urchin, stealing to eat and outruning the city guards. He is assisted by his best friend, a monkey named Abu. Friendly and charming, Aladdin seeks to rise out of poverty and live the good life. When he uncovers the magical genie, he believes that he has the answer to all his wishes.