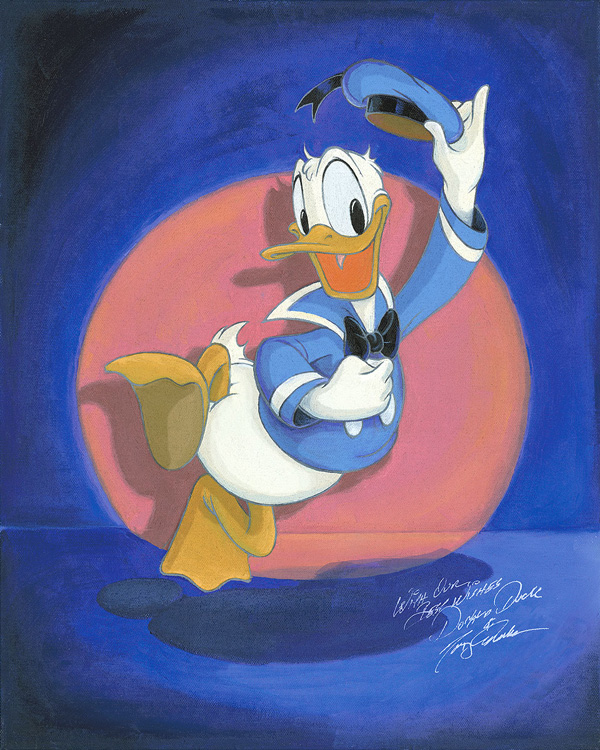 As a Disney animator, Tony Anselmo has worked on nearly every "traditionally" animated feature at the studio since 1980.  But his apprenticeship with Clarence "Ducky" Nash, the original voice of Donald Duck, led Tony to his second career as Donald's voice.  In 1990, with The Prince and The Pauper, he became the first person to both animate and voice Donald Duck. Anselmo, clearly a talented visual as well as voice artist, is a member of the Academy of Motion Picture Arts & Sciences and serves on the Animation Executive committee.  In 2009, he was honored with the Walt Disney Company's Disney Legend Award. It is exciting indeed for animation collectors and Disney fans to be able to collect signed limited editions and commissioned original art by such an accomplished and well regarded Disney talent.  Contact the gallery today to see what might be available in the way of commissioned original art from Tony Anselmo, before he becomes so busy it is years in the making! Although Anselmo moved from a student role at CalArts to a professional one at Disney animation, he was assigned to a new and more intense course of study at the Studio. Anselmo says, “Ron Miller had just set up a program called the Disney School of Animation on the lot with Don Hahn, to train new artists in carrying on Walt’s traditions in character animation. We weren’t even in production. We were being paid to animate tests with Eric Larson, studying life drawing with Walt Stanchfield, and learning more than we had at CalArts. It was an immersion in Disney character animation. That’s never happened since. I was honored to be a part of that. We were assigned Disney animation desks, and Eric would hand out the animation tests to us. We’d animate a scene, bring it in to Eric, and he’d ‘plus’ it and show us how it was done. He was incredibly patient, and generous with his time.” In subsequent years, Anselmo contributed to the animation of 20 Disney animated features, including The Black Cauldron, The Little Mermaid, Beauty and the Beast, The Lion King, Tarzan and The Emperor's New Groove. One of the Disney stalwarts that Anselmo frequently encountered during his early days at Disney was Clarence Nash, the original voice of Donald Duck. Tony’s friendship with Nash started casually. Anselmo says, “I was really just curious about it, because I could do voices, and that was one voice I couldn’t do.” Unable to duplicate the sound, Anselmo asked Nash to show him his technique. “It took me a long time to learn that, and actually I think it took Clarence a while to perfect that as well,” Anselmo says. The year of 1984 was Donald Duck's 50th Birthday, an event celebrated by Disney with events, products, and personal appearances all around the country by Nash. He and Anselmo continued working together and occasionally socializing. During this time, however, Anselmo was unaware that Nash had leukemia. From time to time, the two continued their informal “training” in performing Donald’s dialogue, Anselmo never suspecting that Nash had a larger motive in mind. “I think, in hindsight, one of the reasons Clarence spent so much time working with me on Donald’s voice and personality before mentioning his plans for succession is that he wanted to make absolutely sure I would do that legacy justice before telling me.” When Nash died on February 20, 1985, Anselmo inherited the role of Donald Duck as Nash had wished. But certain things have remained the same. “We use the same mike Clarence used,” Anselmo says. “It’s the original ribbon mike and it has a much warmer sound.” He has also developed the fine points of his own technique. “I remember Clarence saying, ‘The Duck sounded really good that day.’ I’d ask him, ‘What do you mean?’ and he’d say, ‘Oh, some days Donald just sounded better than others and I don’t know why.’" Anselmo’s first performance as Donald was on a television program titled D-TV Valentine, a special on The Disney Channel, and since then, Anselmo has voiced Donald hundreds of projects, including television, feature films, theme parks, and consumer products. Anselmo has also shared voice-over duties (with Russi Taylor) for Huey, Dewey, and Louie since 1999. He has voiced the nephews on the TV special Down and Out With Donald Duck, and the shows Mickey Mouse Works and House of Mouse (while Taylor voiced the nephews in DuckTales, Mickey's Once and Twice Upon a Christmas, Mickey's Speedway USA and the remastered DuckTales video game in 2013.) He also lent his voice to minor characters in The Great Mouse Detective, Mickey's Around the World in 80 Days and Phineas and Ferb. Anselmo has also worked as a voice actor for the Kingdom Hearts series, which features Donald Duck as one of three main characters. He also provided the voice of Donald in the video game Kinect Disneyland Adventures in 2011. Anselmo has been honored with several awards and nominations. He was a winner of the 2014 BTVA Television Voice Acting Award for Best Vocal Ensemble in a Television Series - Children's/Educational for Mickey Mouse Clubhouse; as well as the BTVA Video Game Voice Acting Award for Best Vocal Ensemble in a Video Game - Kingdom Hearts 3D: Dream Drop Distance. In September 2009, Tony Anselmo was named a Disney Legend. Anselmo began collecting Disney objects and ephemera at an early age, and is known for his comprehensive collection of Disney posters relating to the works of Walt Disney. This expertise resulted in a 2002 art book, The Disney Poster Book featuring the Collection of Tony Anselmo
Read More about Tony Anselmo