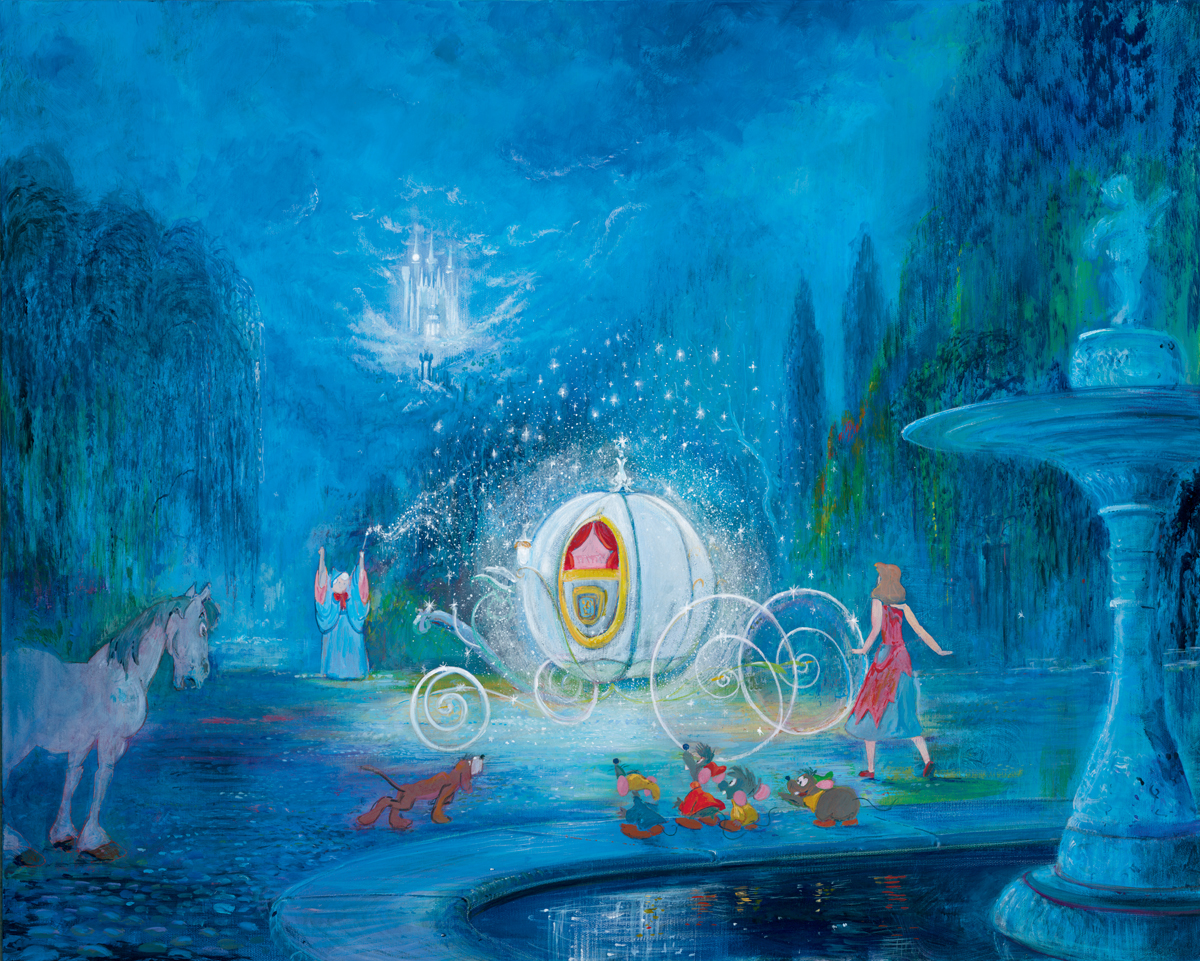 Many sons growing up in the shadow of a famous father feel that they want to carve their own paths in life. That was me, says Harrison Ellenshaw, son of Disney Legend and master painter Peter Ellenshaw, who won an Oscar for his visual effects work on "Mary Poppins and was nominated a total of five times for the Academy Award. I had grown up fascinated by my father's painting." Harrison says. He would sometimes give me canvas and paints. I have photographs of me painting when I was a small boy. My father's life was painting, even during meals he would bring the canvases he was working on into the kitchen and sit and eat and look, criticizing his own work. My mother was not always pleased that this was how the family spent mealtime, but she understood his passion. But I found both this passion and his incredible talent intimidating. I was convinced I could never live up to any of it. Harrison graduated from Whittier College with a BA in psychology. By then, in the early 70s, the country was in the throes of a recession and Harrison found it difficult to find a job. I remember driving with my father one day, he recalls, and he said, Well, you know, just for the time being, if you're interested, the matte department at Disney is looking for apprentices. The department head at that time was Alan Maley, who had worked as a matte artist with Harrison's father in years past. So I went and talked to Alan, and we agreed that we'd give it six months. Alan became my mentor, Harrison says, and it was due to his enthusiasm and encouragement that I really got bitten by the film bug. It had been very unique growing up having a father who knew and worked for Walt Disney -- he was a living legend, an icon. But in a sense I took being in a 'show business family' for granted. It was Alan who showed me what was so special about film -- about matte paintings; how your work on shots could be an integral part of telling a story." After about four years, Alan Maley retired. "He told me I could take over as department head," Harrison remembers. It usually takes twelve years as a journeyman to become a department head. The studio was a little hesitant and I was scared to death. Maley offered to return to give Harrison a hand if necessary, so he took the job. Then, Harrison got a phenomenal break. Fate smiled on me, as it had for my father, he says humbly. I got a chance to do some work on Star Wars. At this point, a tale of two Ellenshaws becomes the tale of two separate Ellenshaws, as this is where Harrison begins to really strike out on his own, away from his father's legacy. His work on Star Wars was so well received that he was asked to return to work on The Empire Strikes Back. By this time, having clearly carved a niche for himself, Harrison had no problem working with his father on Disney's The Black Hole in 1979. Harrison then went solo again to add his unforgettable touch to Tron, one of the most unique and visually stunning films ever, now a cult classic. After work on "Captain Eo," "Superman IV," "Ghost" and other films, a memorable year for Harrison was 1989, when he worked on Dick Tracy. The matte paintings were visually the star of that film, he recalls. And by then I was doing some fine art painting on my own. But it was around that time when I was working on this incredibly colorful film that an exhibition of Fauve artists came to the Los Angeles County Museum of Art. Fauve, which in French means wild beasts, was a name given to a group of up and coming rebel French artists in the 1900s, who included among their ranks Henri Matisse and Andre Derain. The Fauve painters took a traditional art form and began using forms and colors which were not found in nature, painting familiar objects with startlingly wrong colors, in an attempt to liberate color. Up until this point I had been painting trees with black, gray and brown trunks and green leaves, he points out. And then I came across the Fauves, who were only in existence a few years, and their intense use of color. They had done something I really enjoyed and appreciated. So I began to paint far more colorfully than I had in the past. Today, I enjoy painting as much as ever and I enjoy doing things that are really colorful. The great thing is that now with the giclée process of making prints, you can match the colors perfectly. Harrison's work has been exhibited at the prestigious Hammer Galleries in New York, as well as galleries in London and San Francisco. Collectors Editions is proud to publish the works of Harrison Ellenshaw, in all their true, vivid color.
Read More about Harrison Ellenshaw