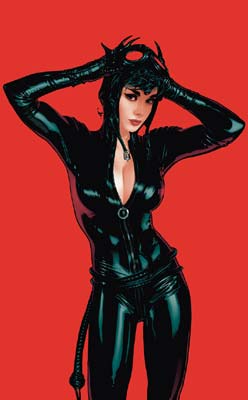 Adam Hughes is most commonly known for his stylized renderings of women; super heroines, damsels in distress, figures in fantasy. About the time Adam began making waves in art circles and his artwork really began to be noticed, the term "Good Girl Art" had been coined, and it best describes exactly what Adam does. He is considered by many to be one of a new generation of Good Girl artists inspired by Petty, Vargas and Elvgren. When describing his own work, Adam has used the term "naturalistic" as opposed to the term "realistic" ; which describes what he does perfectly. In 2008 DC Comics hired Hughes to create a poster of the major female characters in the DC Universe as a giveaway for that year's San Diego Comic-Con, to promote DC's upcoming projects. The poster, called "Real Power of the DC Universe", features 11 female characters, standing and sitting abreast of one another, as in a Vanity Fair gatefold layout. The characters are mostly clad in white outfits rather than their familiar superhero costumes, as per DC's request, so Hughes, wanting to avoid making the poster look like a bridal magazine layout, gave each outfit a slightly different color temperature. He also gave each character a distinctive style. The garment worn by Wonder Woman, for example, resembles a Greek stola, while the one worn by Poison Ivy features a floral trim. Because the Catwoman series was coming to an end, DC instructed Hughes to leave her off the poster, but Hughes, who was fond of the character, drew her on the far left, figuring that he would Photoshop her out of the final art. At the last minute, however, DC, having seen his progress, decided that liked her inclusion, and told Hughes to leave her in. She is dressed in a black latex evening gown, with only a white shawl, because Hughes had less than 24 hours after DC revised their decision to include her, and found it easier to render her in a black outfit. Hughes reasoned that Selina would be irritated at being intentionally left out and then being included as the last minute, and wore the blackest thing she could out of spite. The poster has become an iconic one, with a long-lived popularity, and has resulted in requests for Hughes to do various other similar ones with men, Marvel characters, etc. It is one of the images for which Hughes has gained a reputation as one of comics' foremost cheesecake artists. About this status, Hughes has said:

I don’t know if I embrace the term 'cheesecake artist'. I don't like hugging anything. Maybe I give the term a warm yet firm handshake? It's great to be known for being good for something, and it not being altogether infamous.