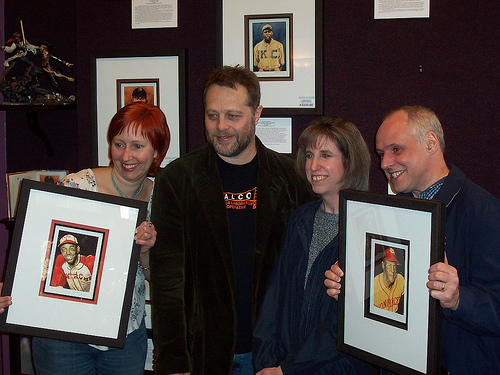 Reston, VA- ArtInsights Gallery in Reston Town Center has secured exclusive rights to exhibit and sell the original watercolor art used for the bestselling book “Heroes of the Negro Leagues” by illustrator and DC Comics Art Editor Mark Chiarello.  Many of these illustrations were used for the first color baseball cards for the Negro Leagues.   The exhibit will include images of famed Negro Leaguers Satchel Paige, Rube Foster, Josh Gibson, Buck O’Neil, and many others.  Mr. Chiarello will be appearing in person in the gallery opening weekend of Major League Baseball, opening day of the new exhibit, Saturday, March 29th, from 2 to 5 pm.  The show will run through May 30th, or as sales allow.

The publication of the original baseball cards that inspired the “Heroes of the Negro Leagues” book marked the first time most of the players ever appeared on a baseball card.  Mark Chiarello says he and writer Jack Morelli were inspired to create the cards when they visited the National Baseball Museum in Cooperstown, New York where they saw a plaque for a player they’d never heard of, Judy Johnson.   After some research, they resolved to correct the fact that they and other hardcore baseball fans knew so little of these great athletes.  The cards were expanded into a book that was rated 2nd of all sports books on Amazon.com in 2007, with watercolors the New York Times called “evocative”.   Los Angeles magazine said of the book, “Mark Chiarello’s dreamy watercolor portraits transport us back to a league that time (and most everyone else) has conveniently forgotten”.
Mark Chiarello is an award winning artist and the art editor of DC Comics, and has done illustration for LucasFIlm, Disney, Universal Pictures, Topps, and Universal Pictures, to name a few.  He has won the comic book industry’s Eisner, Harvey, and Reuben awards.  He is also creating art for instillation in the new Gaylord National Resort in Maryland’s “National Pastime.”
Says ArtInsights co-owner Michael Barry, “We’ve carried illustration art for quite some time, but never anything sports related.  Mark’s Negro League watercolors are so beautifully executed, it was a perfect fit.  He is more than just a skilled watercolorist, with these pieces he’s captured so much more”.  A great deal of research was required for these portraits, and artist Chiarello says he often looked at more than 200 pictures of a player to find the perfect reference to use.  Barry’s partner, Leslie Combemale, adds,  “Of course they are historically important, but they definitely stand alone as great art.  Many know the more famous Negro Leaguers, but these illustrations allow collectors to connect with some of the many unsung heroes who deserve more recognition.  These watercolors offer an opportunity for baseball fans, art collectors, and history buffs to expand how they see the world, as the best art always does, and Mark has an encyclopedic knowledge of the subject.  We’re proud to have his art in the gallery.”
ABOUT ARTINSIGHTS
ArtInsights, established in 1994, is a privately owned business located in Reston Town Center, Virginia.  In addition to specializing in creating and developing collections of animation art from Disney, Warner Brothers, Hanna Barbera, and all other major studios,  The gallery is constantly looking for new and important artist of illustrative, animation, and film art to add to those they currently represent.  Their roster includes Chuck Jones, John Alvin, Toby Bluth, Tim Rogerson, Mary GrandPre, and Jim Salvati.  They recently had the international exclusive first release of limited editions of the Harry Potter book covers by Mary GrandPre.
With more than 30 combined years of experience in these art genres, owners Michael Barry and Leslie Combemale work closely with individuals and corporations to ensure the integrity of their clients’ collections.  ArtInsights is the only art gallery in the Washington Metropolitan area authorized to represent Warner Bros., Hanna Barbera, and Disney interpretive art to the public.
ARTINSIGHTS
ART ~ ANIMATION ~ FRAMING