Skip to content
Star Wars original art, a galaxy not so far far away…
Such a crazy series of events led me to Celebration 4, i couldn’t explain it if i tried.  Suffice to say it resulted from some Shakespearean drama between me and one of the wholesale companies i worked with.  However it happened, i wound up there.  And the beauty of it is, i met one of my favorite people in the world, Mark Chiarello, while is was there, who has become a close friend and artist client of mine (check out his website www.markchiarello.com)  Most of my time at C4 was spent with my close friends John and Andrea Alvin.  John, who had done over 200 movie posters and was already very famous for them, was promoting the official C4 poster, which he had done, and a Star Wars limited edition he had done for the event.  We had such fun together, and spent time with Tsuneo Sanda, another Star Wars artist, and up and comer Randy Martinez, who had created the other official C4 poster, and who is now also a close friend of mine, and whose original art i represent exclusively.  I also met his gal pal partner Denise Vasquez, who is a gazillathreat, visual artist, actress, musician, philanthropist–(check out her site www.denisevasquez.com) Both of them are now creating great Star Wars art and now Randy is creating one of the official Star Wars posters for C5! 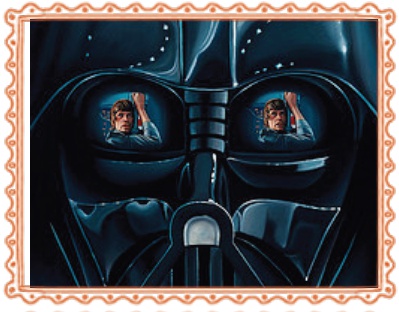 Meanwhile, it occurred to me that it might be an exciting and good idea to have a booth where fans and collectors of John Alvin’s art could come during C5 and meet and talk to Andrea, John’s wife, and see the last of John’s Star Wars art that is available for sale.  Andrea and I have come together in partnership to support and promote the legacy of John’s work, and part of that is to meet, greet, and sell to his Star Wars fans who have been so good to him.
Let me tell you about Star Wars fans…You who have read my blogs know that I absolutely LOVE the Harry Potter collectors and fans.  They are an erudite, enthusiastic, gracious, and articulate bunch.  Well, the same goes for the hardcore fans of the Star Wars movies.  Of course, both have two sets of collectors, the ones without two dimes to rub together (often young, and in the case of Star Wars, sometimes basement dwellers) that are genuine and love the properties wholeheartedly, and the ones that own or work for huge computer companies, or build the space station, or solve the quandaries of astrophysics etc, who buy the big ticket items, travel to the European cons, and write blogs that are read worldwide (HP blog writers, you know who i’m talking about!) Of all the collectors in the worlds of collecting, and I know most of them, Harry Potter and Star Wars are two of the very best most loyal fan-bases.  Given that, and my own love of those two sagas,  it was only natural that i would build a clientele for original art from those properties.  From Harry Potter, i’ve been able to uncover the most beautiful art created for both the books and the movies.  For Star Wars, I have found the same is true, with one very interesting wrinkle…Let me tell you what is special about the art of Star Wars…
George Lucas.
Seems kind of obvious, i guess.  George Lucas is the reason Star Wars exists.  But in the world of art, especially Star Wars art, he is way way more.  Let me explain.
George Lucas buys art.  Not just a little bit of art.  98% of the art.  Even though there are laws against such things, LucasFilm has set something up where if you are an artist who wants to work for LucasFilm, whenever you create art for the franchise, you have to offer your original art to George first.  And George, as you may guess, has a bit of cash.  There are artists, really famous Star Wars artists, who have sold almost everything to him.  Which obviously is kind of awesome.  He supports artists!
But that also means there is very little original art available for the fans.  The deal is, if you create art for LucasFilm in any capacity, you must offer George the first opportunity to buy the original art.  As a result, Tsuneo Sanda, Christian Wagonner, William SIlvers, and many other amazing artists, are very hard to get Star Wars art from, unless the LucasFilm budget has been exhausted at exactly the right time!
There is also a very interesting disparity of pricing and popularity between the big daddies of Star Wars art, and the artists that sell their art for nearly nothing.  Obviously everyone wants to create Star Wars art.  So lots of newcomers will create art for nearly nothing.  They create art for sketch cards and sell them online for $100 or $200 or less.  It would take a savvy art collector indeed to be able to decipher who out of that collection of artists might become one of the big daddies over time!  Gratefully for Randy Martinez, and a few others, they have jumped from one to the other, not a little because of George’s interest in their original art!
The way LucasFilm has set up the creation of art, if an artist wants to continue working for them, they can’t create art outside of sanctioned images commissioned by LucasFilm.  If they starts doing original commissions and LucasFilm hears about it, they’ll never work for them again.  Great motivation to stay in line! 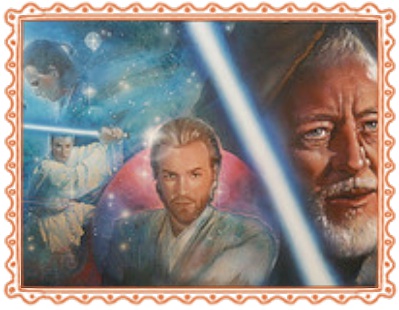 And.  Seriously.  What can be better than knowing George Lucas, who created Han Solo, Leia, Jabba and Yoda, would want the art that was inspired by those creations?
It’s not like there isn’t good art available.  Our friends at Acme (you can buy the art online on our website under “cinema, star wars”) have created some great limited editions based on the art George was most excited about.  But the original art–good original art by the artists George collects–that’s hard to get.
That’s why we’re so excited.  We have struck a deal with those artists to sell their art, whatever George and his crew decline, however temporary, to the true and faithful Star Wars fans/hopeful art collectors.  And we’re getting more and more artists all the time.  So.  If you are a fan of Star Wars…give us a call, or stay tuned, because by the time C5 rolls around in August we are going to have emassed quite the awesome collection of original Star Wars art. 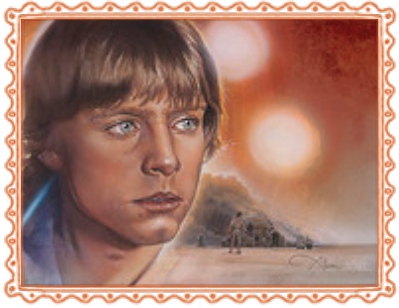 We’ll be at Celebration 5 with Andrea Alvin, John Alvin’s wife and artistic partner, and with Randy Martinez, and who knows who else in the world of Star Wars art, and even now we are pulling together gorgeous original art that spans the spectrum of the Star Wars universe.
If you don’t know who Boba is, this isn’t for you.  But if you know an X wing from a Tie Fighter, if you know Tatooine isn’t something you do as a drunken sailor on leave, if Salacious Crumb is more than a breakfast coffee cake…we might be able to hook you up… 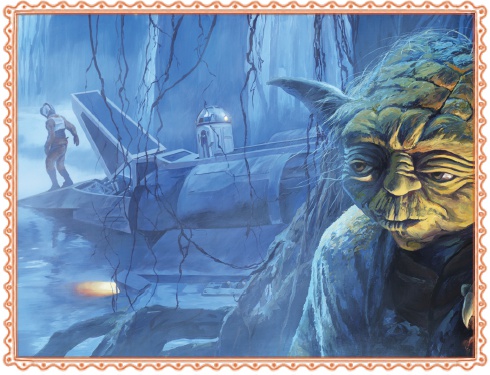 Stay tuned.  As usual, we have a plan…and the force is strong with this one…
Leslie
ArtInsights